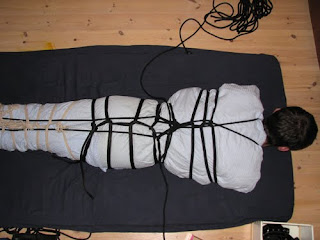 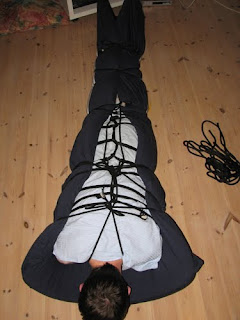 Posted by Ingvild at 8:52 PM No comments:

Mondage met up at my place at 1pm yesterday. He left for home a little after 4am, 15 hours later. During those hours we played. Alot. Several different positions, and I suppose you can call it several different sessions.. In a way. There were food breaks, ofcourse, and we talked alot as well.. But it was still a very intensive day of playing, and I got really tired. Ofcourse, it was definitly worth it! :)

So what did we do? I'll have to do this chronologically, and see how much I remember..

1. Had him undress, then tied his legs so they were spread. Checked if he'd done his homework, which was to learn some anatomical terms, and be able to point them out on his body (simple stuff like "testes", "glans", "perineum" etc). This didn't turn him on, but I think it's important that he knows his own body well, so I didn't care.

2. Tied him in the fetal position and left him on a matrass for about 20 minutes. Covered him with a blanket so he wouldn't get cold. Used the ball gag trainer (like a "harness" for the head), the posture colar and alot of leather cuffs and chains.

3. Moved his arms around a bit, so he'd get better bood circulation, and started teasing him and playing with him while in a fetal-like position. Most of the time, he was sitting upright, meaning he had little or no balance and was depending on me for support. An excercise in trust. Re-tied him so he was lying flatter on his back when his butt started to fall asleep. Removed the gag. Kept up the teasing and petting and scratching and breath controll. We're baby-stepping towards a a regular sub/Dom-relationship, and I have the impression he's enjoying it. Told him he shouldn't come unless he'd asked (and recieved) my permishion, but revoked that ban after a while. So he came, though in the end he needed a hand free to be able to do it. Right after he came, I ordered him to taste his own cum. Which he did. I might pick up on that whole orgasm denial thing later on, because I find it alot of fun. It's yet another way of controlling him, "owning" him.

5. Mumification. Roled him into a sheet, then tied him up with ropes from shoulders to ancles. Then roled him up in the thin matrass he was lying on. Left him there for about 20 minutes or so.

6. Released his hands and arms from the body-tie, and secured them over his head instead. Gaged him. Tortured him with tickling. The goal of this session was to get him down, mentally, to a place he probably hadn't been before. Into "sub-mode" in a way. And I did it! With a combination of heavy tickling and relaxation periods when I told him how good he was and how proud I was of him for being able to do it. I think the talking did more than the torture, but the torture was needed to get him mentally off balace for a short while so that the talking could do it's job.

After the first bout of tickling (which seriously wasn't much worse than tickling I've done on him before!) he started tearing up, by the second one he was sniffling and even after that he was able to take a third round. I know it was really hard on him, I could see him struggling, but he accepted it and he endured. As I'm sitting here, writing this, I'm again reminded of how proud I am of him for that! He absolutly hates being tickled, and yet he was able to accept it because I wanted him to. Not once, but three times! That's a gift I never thought anyone would give me, and as I'm writing this I can feel a lump in my throat because I'm so pleased with him. With us. We've come a long way since we first started playing, and I'm really looking forward to future sessions with him. I doubt I'll do anything like this to him in a long time, it's too taxing on both of us, but I think it was important to do it.

Afterwards, I untied him completely and we sat talking for a long time. He'd been down deep, emotionally, and it took some work to get him back up. I think I handled that part of it pretty well, too. I've been there, I've felt that same emotional emptyness, and I think having played the sub-role myself, I know better than many Doms what's needed.

7. We took a break, made panecakes and relaxed. It was past 1am before we finished.

8. Gaged him and tied him in a rather tight hogtie. Left him under a blanket, while I sat waching TV. He almost fell asleep in that position! I was feeling tired too, so I knew this part couldn't last long. Loosened his bonds a bit, to make his hands less cold and purple (a sign of poor blood flow, in case you were wondering), and started playing with him. The regular stuff, breath controll, scratching, nibbling etc. Concidered refusing him the right to come, but decided against it after a couple of minutes. We were both too tired for those kinds of games. So he was lying on his belly, in a hogtie, and while I was biting his ears and neck, and doing breath controll, he came again. Untied him, talked for a bit, let him clean up.

And then we talked some more, and some time after 4am he left. That was truly a long day! :D
Posted by Ingvild at 3:40 PM 1 comment:

Another weekend-party is over, and I had a great time. T played with me, and I really loved it even though I was so tired I could barely stand. There was flogging, groping, petting and I spent some time sitting on the floor by his knee. I really like having him pay attention to me like that. He even enlisted help from M, a good friend of ours. She mainly had fun controlling the vibrating egg inside of me, and in the end she groped my boobs. She's really good at groping. *grins*

I also played with Mondage. In fact, we had two sessions spread over two evenings. On both occations I tied him to a table in the main area, partly because it was practical and partly so he'd get used to the idea of people waching him. He's got a fetish for (motorcycle-) helmets, so we used that in addition to gag and blindfold, which I think he appreciated. He doesn't have any good pictures of himself wearing a gag, so I took alot of photographs. I'm also quite pleased with the bondage I did on him. Note that the rope went between his toes at first, but it got too uncomfortable so I moved it to run around his foot. Not as cool, but I don't want to hurt the poor boy (at least not severely...). Without further addo, here are some pictures: 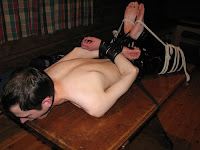 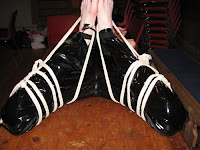 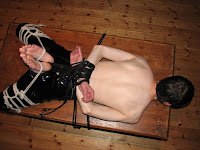 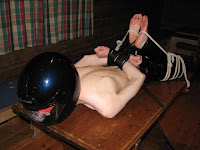 Posted by Ingvild at 9:00 PM No comments:

I'm getting increasingly fascinated by bondage. Don't get me wrong, I've always enjoyed it to some extent, but I haven't taken the time to actually sit down and learn the techniques properly. I know a couple of neat things, and I tend to remember stuff I've seen done. But I don't own a single bondage book or DVD, and I don't want any either. They'd just lay around gathering dust.

But occationally, when I should be in bed but in stead am procratinating in front of the computer, I randomly teach myself some bondage. Last time, I ended up learning a neat technique that I later used on Mondage' arms (I've posted pictures of that previously). Tonight, I taught myself how to make a collar (or a bracelet etc) out of rope, based on this Youtube video. I saw the video once, saw the beginning once more, and then tried making the collar once. It was really easy, and it worked. I think it looks beautifull! Here are the pictures to prove it:

Posted by Ingvild at 2:04 AM No comments:

And then there was sex

Had sex this morning. *grins* Just a quicky really. I masturbated and had an orgasm while T was in the bathroom. When he got back to bed, I sucked his cock for a while, and then we fucked. It was very uncomplicated and nice. And I enjoyed being able to solely focus on him and his pleasure, and not bother about my own. I'd like to do that again sometime.
Posted by Ingvild at 8:17 PM No comments:

Played with Mondage yesterday. From about 1:30am to around 3:am. My boyfriend, T, was present most of the time. Afterwards, we sat talking until 5:30am. The talking was good. The talking is what's the most memerable about yesterday. We are really getting close to eachother now, close enough that I can ask him about the most intimate and private things and get honest answers from him. I still feel he's holding some things back from me, perhaps not intentionally, but we've come a very long way in just over a month.

One thing I've discovered is that I don't like the idea of him playing with others. I analyzed this feeling yesterday, because it's very unlike me. I don't get jealous. Ever. I think the main reason I get possessive is that I don't actually have any emotional hold on him. With boyfriends I can lean back on the fact that they love me. Mondages does (thankfully) not love me, and we don't even have an "ownership" thing going on. It isn't a traditional sub/Dom relationship. I don't "own" him, he owns himself. He's the one to decide whom he plays with, not I. And that's the way it should be. That is what scares me, I think... That's what makes me (in my head, not in my actions) possessive: I have no hold on him, no claim to him. He's very... Ephemeral. In the sense that he might disappear at any time, and I won't have any right to try and stop him.

So why get possessive about someone so ephemeral? Well, I won't deny that I'm slightly hooked on playing with him. BDSM-wise we're quite well-matched (at least better than me and Pet was), and we've had some great sessions together. Outside of the BDSM-scene, we have practically nothing in common what so ever, but it doesn't matter because the only time we hang out is when we play. It's purely for pleasure, both our pleasure, that we have anything to do with eachother. I enjoy it, and I'll admit I wouldn't enjoy loosing it. I think that's why my thoughts get slightly possessive.

I won't let my thoughts interfere with my actions, though. Like T just said: You either deal with it or you stop playing with him. The later isn't an option for me at this point, so ofcourse I'll go for the former. I deal with it, and don't let it fuck anything up. He still owns himself, and decides for himself whom he plays with. I won't get upset or insulted or anything by him choosing to play with someone else. That would just be stupid.
Posted by Ingvild at 2:47 AM No comments: