Yet another thing I'd forgotten to document: Tuesday almost two weeks ago, I played with Winnie. A bit of bondage, some not-so-hard spanking and some breath control. I wasn't planing on the breath control, but noticed he started breathing heavily anytime I got close to his mouth. So I asked, he said it was ok, and I did it. And it really, really turned him on. So that was fun. :) Didn't push any boundaries or anything, just nice and easy.

After I'd untied him, he stayed small and quiet for at least a couple of minutes. That's an accomplishment I'm very pleased with, as he's usually very cocky. Your typica naughty sub, joking and teasing just about everyone, in the hope that someone will take him firmly in hand. While I understand the reasons behind his behavior, it sometimes gets a bit annoying. So when I finally was able to get him down, all quiet and subservient, it felt very nice.

We talked quite a bit afterwards. It's very rewarding the way he trusts me. He doesn't trust easily.
Posted by Ingvild at 1:16 PM No comments:

Chasing down the prey

I forgot to mention something in my last entry. I played with Corvus on the 12th of October too. And I finally got him to come. That was fun, another point checked off on my to-do list.

On Friday, I played with Corvus again. Like most times we play these days, it's in the back of his car. It's got six attachement points in the floor as well as four (I think) high on the walls. It's got light. It's even got heat, which is an absolute must now that winter has arrived. On the floor is a carpet, and on top of that is a thin matrass. The latest additions are two blankets. Sure, it could have been bigger. But concidering the fact that we're playing in the back of a car, it's pretty damn awsome.

I had just come down with a cold and was feeling rather tired from the past two weeks of work, so unfortunately I wasn't up for much playing. However, I don't always need the play either, so I didn't really mind. I can feel my whole attitude changing when I get the collar on, regardless of wether we're in a session or not. And apparently, other people notice this change in me too. I got a couple of comments. It felt nice to just be a sub, not having to decide or boss people around for once.

There was a woman there, whom I'm naming L. L is about my size, but with larger boobs. She's a bit older than me, and obviously more experienced. She's bisexual, and we've traded a few complements and such before. She and T hadn't really talked much, but when he saw how fascinated she was by me, he wanted to take advantage of it. Long story short, we ended up spending at least a couple of hours on the couch up in the attic. L, T and I. She went down on me, and she was really, really good at it. T fingered both me and her. I went down on T, and she even helped out a little. None of us came, because we were distracted from the talk and merriment that went on downstairs. But it was highly enjoyable even so. She seemed pleased with the experience, and I don't think it'll be that hard to make her do it again.

When we got home, T and I talked a little about L and what had happened. This isn't the first time we've shared a woman, but it doesn't happen often. We both love it. Chasing her down is a challenge, the teamwork is fun and the sex is ofcourse highly enjoyable. And I feel that as we share the experience it brings us closer together. I like that.
Posted by Ingvild at 11:30 AM No comments:

Out of the blue, I've suddenly landed a job. Just a two week engagement, but still it is work. This means I've completely forgotten to blog.

So instead of telling you all about what's been going on lately, I'll just link to Mondage's logg entry on Fetlife. If you haven't registered at Fetlife yet, it's certainly about time you did so. Here's the link. And just as a teaser: It's about a kidnapping. And it was awsome.

In other news, I've also had a fairly big fight with Mondage. I knew it was comming sooner or later, but it still hurt. I don't know what consequences it will have yet. Time will show.

What is worse is that the fight with Mondage affected Corvus in a way I really hadn't forseen. He must have somehow felt hit by what I said to Mondage, without actually knowing enough about our previous conversations and fights to get a proper context. Mondage has actually handled the fight WAY better than Corvus have. Which is strangely illogical, as I was never fighting with Corvus. He was just being a mediator, a middle man, supporting both of us and giving us the opportunity to talk things through.

So Corvus has pulled back from me and seems to be at a low point in his life, emotionally and selfconfidence-wise at least. And I can't support him through it, because he doesn't want me to. We've had some contact, but I feel that he's inches away from cutting me off all together. I have no clue what's happened, and I feel very sad and stressed out about it. The couple of months I've spent playing with Corvus has been great!!! I'm really afraid of loosing him to something like this, especially when in this case I'd be loosing him to something I did. I'm not sure what I did, but I did something. It hurts and confuses me, and at the same time I know he's hurting too. I just don't know how to help him make it better. I care for him and want him to be allright.

So yeah. Sad, confused. Aching to help, but don't know how. AND busy with work for the first time in months, so I have no time or energy to actually fix it.
Posted by Ingvild at 4:16 PM No comments:

I just wanted to recomend this site: http://malesubmissionart.com/
Over the few years it's excisted, it's gather a LARGE amount of pictures that all in some way display the human male submitting. There are both gay and heterosexual pictures, both photos and painting/drawings. All the pictures come with an explanation for why they have been chosen, and I love reading the different takes on what male submission can be.

If you enjoy male submission, you'll love this site. :)
Posted by Ingvild at 2:36 AM 1 comment: 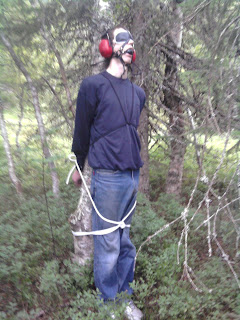 Was cleaning up my phone, and found this one. It's from the session I did with Mondage in the woods. Looks like he's enjoying himself. :)
Posted by Ingvild at 1:54 AM No comments: 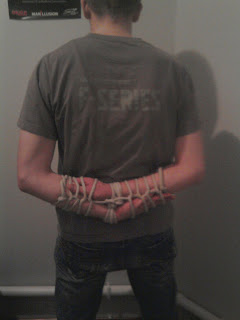 Closeup. (Have tried turning it, but it doesn't seem to work.) 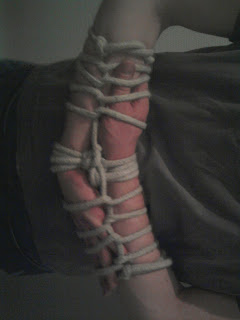 Posted by Ingvild at 1:51 AM No comments:

The last week has been odd. Corvus hasn't been in a submissive mode at all, and I haven't been able to push him into it. We talked it over and concluded that it was probably just a play-overdose. We've done SO much in the last month-and-a-half, I think it's been a bit much for him.

So we decided to slow things down a bit, and it seems to have worked well. Not only in terms of how often we play, but more importantly the intensity and the activities I put him through. I've gone back a few steps in terms of what I'm exposing him to, not pushing any new limits for the last week. And that's worked out well. We did some light bondage and fetish-play on Friday and again a bit more bondage tonight. Tonight we were getting more into a sub-dom-mentality, and I liked that. I would have handled it if he hadn't been in sub-mode too, but I enjoy seeing him giving up control to me. And it seems as though he enjoys it too. We'll continue taking things slow for at least another week, I think. Then we'll see where we are.

While we haven't played much, he's quite excited about a little project I have. He's been a lot more engaged than I'd expected him to be, and generally has been a great help. I'll probably talk more about that next week sometime.

In other news: T surprised me with sex on Sunday morning. Very enjoyable. :)
Posted by Ingvild at 1:35 AM No comments: