Saint and I just had an amazing weekend with a group of shibari / bondage enthusiasts. The entire weekend was just ropes, ropes, ropes. I didn't read books, or use my computer, or check Facebook or read blogs like I use to. On our way home on Sunday, my fingers and hands were so raw and sore, even typing on my phone hurt! I'm still sore, and my muscles ache.

It was SO worth it, though. The atmosphere was amazing, with several couples all tying, watching, learning and enjoying rope in the same room. I got to try stuff that I'd never done before, practice techniques that I've yet to master, and got to develop as a rigger. Saint and I also had a great time as a couple, growing closer and sharing our love of rope with each other.

One technique I kept practicing was a "rope ladder", for use with (full- or partial-) inverse suspensions. I did it four times (!!!), and still it kept slipping. I just couldn't get it tight enough. Finally, another woman there showed me how to do it tighter. Here's a picture of her work, on Saint's legs. I look forward to practicing some more, and see if I can finally get it right. 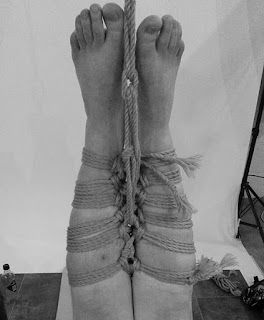 (Also, Saint dislikes feet, both his own and other peoples. So posting this might embarrass him a bit... And we both enjoy humiliation, so hopefully that will be fun.)

Under the skilled guidance of a friend of ours, Saint even got to tie me up. He's never done such advanced bondage before, only some self-bondage and some simple cuffs. He did a "3TK", a box tie with an extra rope added for security and tightness. Here's a picture of my back with the ropes in place: 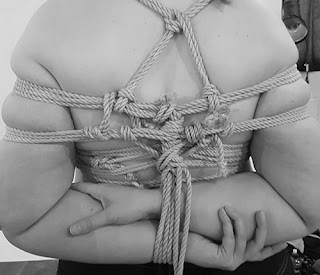 I had to struggle between freaking out (because I was tied up) and enjoying it (because I was tied up). It was exhausting, and several times I was close to using a safe word and begging them cut me out. In the end, the exhaustion, thrill and pain of the ropes, made me zone out. Meditatively. Drunkenly, sort of. A very interesting experience, and I've still got the bruises to show for it. Though in my mind, this has confirmed that I'm still more of a rigger than a bunny.

I also did my first self-suspensions during the weekend. Both times from a hip harness, the first one very improvised and the other one a proper (if slightly loose) Leto harness. You're supposed to be able to turn up-side-down in it, and another women there did just that... I only dared to go down to about 60 degrees, and then chickened out. I've never liked being up-side-down. It was fun to swing, though! 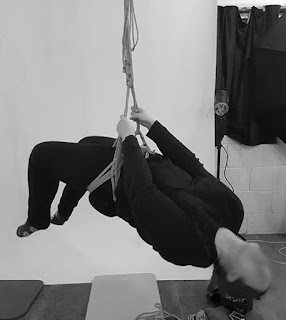 I'd like to try self-suspension again. As long as I could control it 100%, being in the ropes itself wasn't so bad. I want to do it again, not only because it was challenging (though that's part of it).. But also because self-suspension will make me a better rigger. It demands more control, more strength and better technique. Honing my skills, will make the bondage experience better for both my bunny and me in the future.
Posted by Sexyblue at 10:20 PM