A lot of stuff has happened these last few days. As it involves several people, I'll break it down by person in stead of giving a chronological account like I use to.

First and most importantly, T and I are now engaged. This Saturday, the 15th of May 2010, was our 5th anniversary as a couple. And late in the evening on the 15th, he asked me to marry him. Obviously I said yes, and now we are officially engaged. 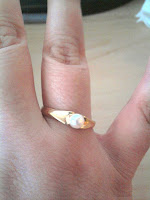 We can't afford rings and such, but he did something really nice and thoughtful. He'd secretly fetched a special ring from my jewelry box, and used it to propose with. It was originally my great-granfather's wedding band, that my grandmother had made into a woman's ring by getting a pearl attached and shrinking it down. I was given it for my confirmation when I was 15, but have never worn it as it's too big for me. To be frank, I'd almost forgotten I had it. As that ring has a historical significance and means a lot to me, I think proposing with it was a beautiful gesture. I'm currently wearing it on a chain around my neck, as it's too large, but I've been meaning to get it shrunk for years. Now I have real incentive to get it done. I'll use it as a placeholder until we can get our own rings.

At the party, the evening before the proposal, T and I teamed up and seduced another woman. I realize this sounds very callous and preplanned, but it was truly more of an accident. We just know each other well enough that we're able to build on what the other starts. Through good teamwork and a great deal of luck and timing, we ended up giving this girl an orgasm. I'm naming her ET in this blog, I don't think I've used those letters yet. The next night, I think all three of us were more prepared for what might happen. We weren't prepared for how far we'd go though. The first night, T fingered her to an orgasm while I worked her upper body. The second night, I went down on her (oh how I've missed doing that to a woman!) and fingered her, giving her an orgasm. Then I went down on T, having him cum in my mouth. I even managed to swallow it all, something I haven't even attempted in years. It's still not a pleasant experience, but it's doable. Besides, swallowing means less mess. Whilst I was sucking his cock, he was fondling and fingering ET, and I think she was touching him too. To be honest, I was quite preoccupied with his dick and didn't pay much attention.

On Sunday, after we made it home from the cabin, T and I had sex. And it was truly great sex. Apparently, our exploits with ET has inspired him somehow. He spent much more time on foreplay now than he usually does, taking more care. He even went down on me, which felt simply divine! I came twice while riding him. Although I was so sore afterwards I couldn't walk straight, it was definitely worth it! The sex felt somewhat like the kind of sex we used to have when we just got together. I hope we have more sex like that in the future.

At the party I also played a bit with Mondage. He'd gotten some new stuff which we tried out, but I feel there's more experimenting to be done later. I obviously tied him up in several different ways. For example, I tied his hands to a robe in the ceiling and then made him stand on just one foot. I also had him try to maneuver in and out of cages with tied down, as well as removing his socks with bondage mittens on. It's fun to see him struggle. I am however getting tired of just leaving him alone, hogtied and gaged. I can't leave the room because he's my responsibility, but he prefers just being left alone. He'll suffer almost anything I do to him, but it's just to amuse myself. It doesn't do anything good for him, he'd prefer to be left alone. I wish there was some activity that he'd enjoy as well. Preferably an activity where I could be involved, not just sitting on the side watching him enjoying a hogtie.

While Mondage was tied up, on our second evening at the cabin, I played a bit with another guy. I won't even bother naming him, as I doubt we'll play again. He's new to the club, doesn't know much, and I didn't really feel like I could affect him. We didn't.. Connect. I didn't even try to place myself above him, I just did the physical stuff. I used to feel like I was getting more in tune with my Dominant side, but lately it's waned again. All I can do these days is tie people up, slap and poke them a bit, and hope I'm pleasing them somehow. I hope it's just mood related, as being Domiant and Sadistic used to be a lot of fun. I think the Sadistic tendencies are still the strongest, but it's no fun being a Sadist if the one your hurting doesn't want to be hurt. Perhaps I'll find a nice masochist to play with in Oslo. One could always hope.

I think I've covered most of it now. Quite an eventful few days, don't you think? :)
Posted by Ingvild at 2:08 AM No comments:

Yesterday, Mondage was here and we played. Or.. He walked away pleased, at least. I'm not sure I'd call what we did playing. He wanted to watch some football, because football is almost like a religion to him. So I tied him up and left him in front of the TV. At first, I did some light reading and spent some time online. Then I went to make us dinner: Pancakes. Frying pancakes takes a lot of time, so most of the match I was in the kitchen and he was tied up in the living room. I checked on him every couple of minutes, because you should never leave a tied up person alone. But mostly I let him be. He even came without me even being in the room.

Being tied up is what he loves, and if it was up to him I think all our play sessions would be like this. Whilst for me, I need something a bit more. This once was ok, because I was in an odd kind of mood and didn't have much inspiration anyway. But this wouldn't be enough for me every time, I'd get too bored.

Oh, and I almost forgot to add: The day before all this, T and I had sex. I really enjoy lazy morning sex, I don't think I can say that often enough. :)
Posted by Ingvild at 4:41 PM No comments:

We talked about it the other day, and I think I've found several reasons why we're not really a good BDSM-play match. First of all, we're too equal. This is of course a great thing for our relationship, but it means we find it difficult to switch into a more asymmetrical balance of power. Because we both consider the other party to be our equal in every way. Ofcourse, I feel that play-partners are my equals too, but it's different. I'm able to switch from a neutral non-playing stance into a sub/dom stance more naturally. And that just doesn't come naturally with T. It feels like it's just an act, that it's not really real somehow... I don't feel controlled.

This also means that he can't truly fulfill my BDSM-related needs (and I have no clue if I can fulfill his, as I haven't really understood what those are). We've been living with a compromise for five years, and it's worked out well enough. What little playing we've done has been nice and all.. But eventually, I'll need more than that. The little taste of what submission CAN be that I got a few days ago.. Like I said, it sparked something in me. I realized I'd really missed that, and understood that our compromises can't satisfy me in the long run.

For now, my needs for BDSM-related activities are covered by Mondage. It's not the same, because I'm the Dominant part our the play sessions. But it feeds the need for BDSM, and for now that is enough. There will come a time when switching won't be enough, a time when I need to submit. But not yet. We still have ample time to work something out. I'm really glad this came up now, and didn't hit me like a ton of bricks in a few years time. This way, T and I can come to an agreement about who/what/when/how I can and cannot submit to someone else. And we'll build a compromise that will keep our relationship safe and at the same time fulfill my needs. I'm pretty sure this will work out just fine. :)
Posted by Ingvild at 4:35 PM No comments:

At the party, I'd been giving a few massages, as this is something I really enjoy doing. I was rubbing the neck and shoulders of someone else, when he came behind me and started doing the same to me. It hurt, but once he'd adjusted a bit it was a good kind of hurt. He moved his hands up my neck and started massaging my scalp. I'm not a great fan of scalp massages, but by then I didn't really care... Because he was holding my hair. Not pulling, just grabbing it in by the roots and controlling me through my hair. I claim to not have any fetishes, but that's probably the closest I get. I LOVE when someone grabs my hair like that! Then he started touching my throat. Very, very few people are allowed to touch my throat, but he didn't ask for permission.. He just did it. And perhaps because I instinctively submitted to him, I didn't stop it our question him. With anyone else, I would have freaked out, but not with him. I told him that he was now included in the very small group of people who could do that. Perhaps because I told him and thereby implicitly giving him permission, he then got a bit rougher. He wasn't just touching anymore, he was holding quite forcefully, although he never stopped me from breathing.

When he let me go and turned me towards him, it took me a few minutes before I could stand steadily and look him in the eyes. I'd been way into a "sub mode", and if there hadn't been any others around I would probably have knelt. He was very good in talking me back to a more neutral state, and generally did all the things that a good Dom should do. He's really got an instinctive flair for Dominance, and is very good at reading people. He went way beyond the limits I thought I had, but although he skirted close to my real limits he never crossed them. Stretched them certainly, but never pushed me too far. For such an inexperienced Dom, I'm truly impressed. I'm not even certain he was really aware of what he'd done to me.
Posted by Ingvild at 3:53 PM No comments: