A game of cards and a walk in the woods

Last Friday, I went to War's place to play cards. A bunch of his friends were there as well, and I had a very good time, even though I'm terrible at such games. After everyone had left, we started messing around. Only above the belt, as previously agreed with T, ofcourse. I ended up staying the night.

It was fun. He was less timid this time. Needed less coaching and luring to actually speak his mind. The best part was when we play-wrestled. You see, I try to make him more able to stand up for himself. And I wanted to prove that women aren't made of glass. Both works. After enough teasing and struggling, I actually managed to (provoke him to) get back at me. And when he did, he had no trouble defeating me, which was the point I wanted to make all along. :)

Sunday (two days ago) I finally saw Tight again, after over three weeks appart. We took a walk in the woods, found a secluded spot, and had our very first outdoor bondage- and play-session. It was great fun, though I would have prefered having more time. Leaving earlier in the day, perhaps, and bringing some food and such so we can have breaks. As it was, he eventually got too cold, and the mosquitoes too bothersome. By then, I'd pushed him into subspace twice. Both by tying him up, with a gag and blindfold, and telling him "I'm leaving now". He KNEW deep down that I wouldn't do that, but it triggered some fear in him. Pushing those buttons was scary, but interesting, and we both agree we'll do it again.

I took some pictures while he was tied to a tree. This is probably the most shoddy bondage I've done in years, but it did what it was supposed to do. Quick and dirty. Oh, and btw: He is tied firmly. The ground sloped towards the base of the tree, so that was as far back as he could get his leggs and still be somewhat comfortable. 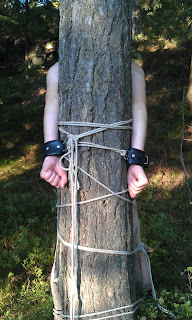 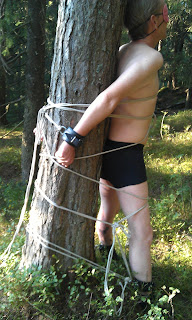